PLAY BLOTTO! is an interactive CD-Rom game that creates an archive of projective interpretations of ten blots, each made from small pieces of pulp from the Five Books of Moses (Genesis, Exodus, Leviticus, Numbers and Deuteronomy).

Players’ first chose a religion and gender, and then compose narrative interpretations of ten “blots.” Their interpretations become part of a large, ongoing database that is searchable by variables and combinations of religion, gender and blot.

Once a player enters their interpretations, they are able to search the database to explore other descriptions of the “blots” made by previous players.

Blotto was a popular parlor game in the 19th century. Players would make up stories of poems based on a series of inkblots that they would either either create themselves or purchase commercially. Children loved the game so much that teachers would use the game as a reward in classes for good behavior and academic excellence.

Hermann Rorschach (1844-1922), a Swiss psychoanalyst, took this popular game and used it as the basis for what is now known as the Rorshach test, a psychological projective test used to assess an individual’s personality characteristics. Rorschach was familiar with the inkblot game and apparently, when he was a child, he played it so frequently that his friend nicknamed him Klecks, or “inkblot.”

Rorshach used the inkblot in his later research in psychology using blots as designated fields upon which patients projected their interpretations of the visual abstractions before them. Rorshach used their interpretations of the forms as a basis for his analysis and research in both childhood schizophrenia and in his later study of religious cult leaders in Switzerland.

His research and later subsequent thorough analysis and quantification of each image by John Exner in the 1960’s, has made the Rorshach test one of the most familiar and most frequently used psychological tests in the field.

Programmed in Director with Lingo, and distributed by CD-ROM 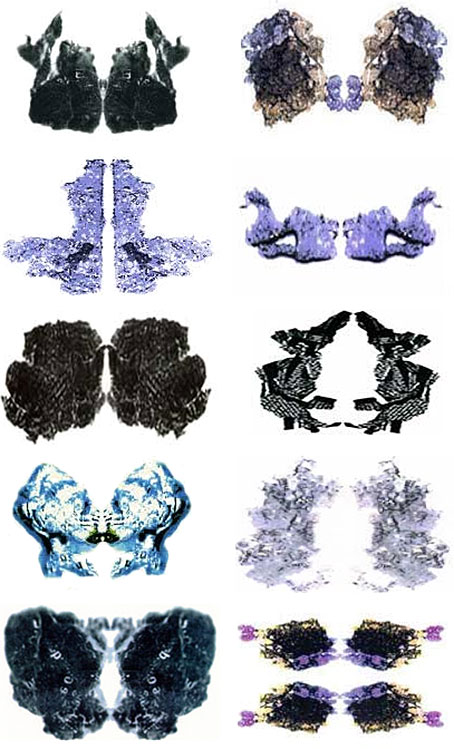