Three blocks in the South of Market, San Francisco reveals its secrets to walkers equipped with HP IPAQ’s and GPS devices as they roam the neighborhood, hearing histories, stories and sounds of the places as it is…and as it was.

Project Artaud, a 30-year old non-profit live-work studio space for artists was, in the mid-1920’s, the tooling factory for the American Can Company, can factory.

Land and History restored the sounds of the environment that existed prior to the overlay of the city — rich wetlands, marshes and shorelines, reminded of the rich cultural presence of the Native American Ohlone-Constanoan people, and brought to the surface the underground water that still flows beneath the streets today.

Scape the Hood : A design case study of a location based digital story mediascape  This paper describes the design process and evaluation of a located mediascape called “Scape the Hood”. It is a written as a design case study and describes in detail the process by which artists gathered content, created regions and rapidly iterated through several designs using a location based software platform. The paper highlights the nuances of designing for GPS and the lessons learned. It includes an evaluation of the experience with feedback gathered from questionnaire and interviews. 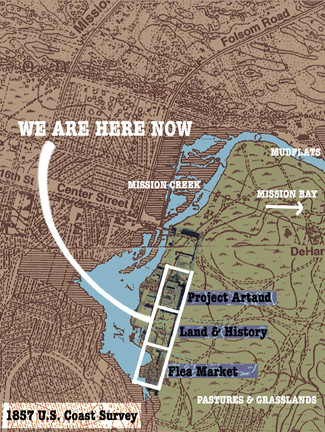