Produced at the IntraNation Residency, The Banff Centre, Banff, Alberta

LANDSCAPE GIVES RISE TO LANGUAGE – Words and phrases used to describe a place and one’s subjectivity within it, create the particular vernacular of a region. You are never fully in a place unless you know the language of the place.

WORDS CALL PLACES INTO EXISTENCE – Although the capacity to experience a place often lies outside of the bounds of language, the compulsion to describe the relationship between the body and the world remains.

LANGUAGE AND PLACE ARE INDIVISIBLE

SpeakingHere is a GPS controlled narrative walk in Banff, Alberta.  Eleven people, each speaking a different language, describe the landscape as seen through a small studio window as though trying to speak what they see into view.   Their descriptions, along with repetitive video pans of the same area shot daily for a week, are “embedded” into the same landscape.

Walkers, equipped with laptops, headphones and GPS receivers, walk through the landscape, listening and seeing the place around them. The images and sounds slip between the  experiences of the walkers themselves as they moved through the extraordinary landscape surrounding them.

The work engaged with the idea suggested by Wallace Stevens that, more often than not, we live in the description of a place, rather than the place itself. 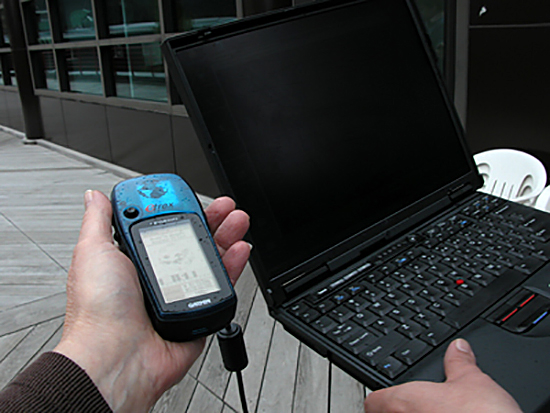