The website requires flash to be enabled on your browser to work properly.

TheWall, the second in the series, maps a 15-mile segment of the barrier/security wall between Abu Dis, in the south, and Qalandiya, in the north, upon selected cities. The first site of overlay is San Francisco, California.

The site contains a detailed mapped trajectory of the wall, focusing on an area between Qalandiya, in the north, and Abu Dis, in the south. Using geo-referenced media, including video, sound and photographs, the website tracks the impact of the wall on lives and economies along its route through walks and travels between Abu Dis and Qalandiya, and talks with residents, business owners and families who live along the route of the wall.

New cartographic tools, working iin conjunction with locative media, casts this distant event upon local and familiar ground to convey its impact in local terms. While obvious differences exist, such as political systems, histories, political circumstances, languages and cultures, those junctures where daily, everyday lives are lived and altered by the imposition of the wall are resonant and opportune points of intersections at which to reflect on the complex and nuanced links between one place and the other.

As the wall changes what was once integrated and connected communities in the West Bank, it’s capacity to alter cohesive and interconnected lived spaces, wherever it lays, is the rational and link between the wall’s site of origin and the ground on which its shadow falls. 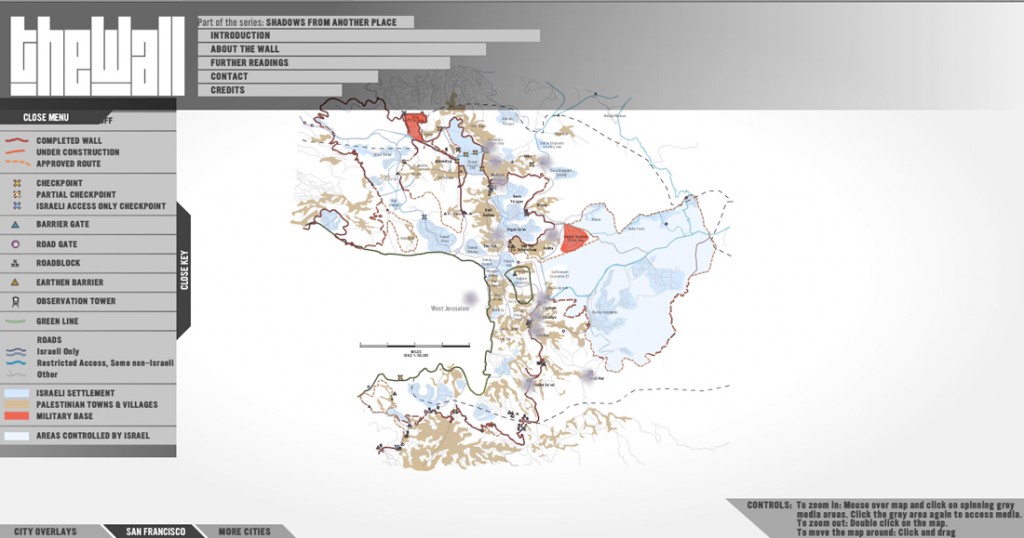 What if international gestures, such as acts of terrorism or war, were like boomerangs that returned to sites of origins with an impact equal to the one enacted? - From the introductory essay to Shadows from another place